Skip to Content
The HSHSL is a part of the University of Maryland, Baltimore | My UMB The Elm UM Shuttle Blackboard

Dr. Theodore E. Woodward, professor emeritus at the School of Medicine, was an avid supporter of the Health Sciences and Human Services Library, donating, among other things, his personal library and mahogany bookcase to the Historical Collections Department. As a result of his support, the department's reading room is named after him.

The Woodward Collection's primary focus is volumes on infectious disease, which was Dr. Woodward's main research interest. The collection also contains works written by Dr. Woodward and historical works on the School of Medicine, local physicians, and the United States Armed Forces Epidemiological Board.

The Woodward Collection is open for research but closed to donations or transfers.

To search the collection use the Library Catalog. 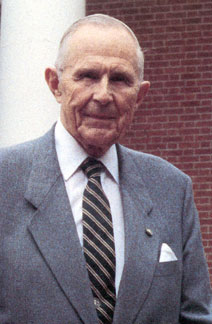 Dr. Theodore E. Woodward was born in Westminster, Md., on March 22, 1914. He graduated from Westminster High School and Franklin and Marshall College before earning his medical degree in 1938 from the University of Maryland School of Medicine. While in medical school, he met and married Celeste C. Lauve, a classmate.

Dr. Woodward's early work with tuberculosis patients inspired his career trajectory and his research on infectious diseases. In January 1941, at the beginning of World War II, he entered the Army, where he continued to work with infectious diseases, earning the Typhus Commission Medal in 1945 for "exceptionally meritorious service" in preventing the spread of typhus within the Army.

Following World War II, he joined the University of Maryland School of Medicine as an assistant professor. He also spent time at the Walter Reed Army Medical Center in Washington studying antibiotics. It was through his work with antibiotics for typhoid fever that he and his fellow researchers were nominated for the Nobel Prize. In 1954, Dr. Woodward became chair of the Department of Medicine, a position he held until 1981.

Dr. Woodward was a dedicated library supporter. In addition to his personal library and bookcase, he donated the Dr. James Carroll, Yellow Fever Commission Letters to the Historical Collections. To honor his many contributions, the Historical Collections Reading Room is dedicated to him, and the Library's most prestigious award, the Woodward Award, is named in his honor. The award was created in 1995 to recognize significant and enduring contributions to the Health Sciences and Human Services Library. Dr. Woodward was the first recipient.

Both Dr. Theodore Woodward and his wife, Dr. Celeste Woodward, have endowed professorships named after them in the School of Medicine. His three children, R. Craig, William E., and Celeste L. (University of Maryland School of Medicine Class of 1972) are all physicians as well. Dr. Woodward passed away on July 11, 2005.