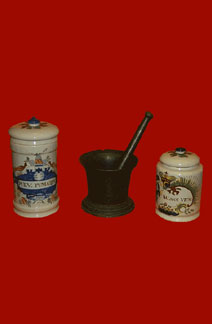 There is no information available to document the specific origin of the Pharmacy Historical Collection. However, we are indebted to the late Dr. B. Olive Cole, Professor of Pharmacy Administration Emerita and Acting Dean of the School of Pharmacy, for producing a 1946 typescript history of the School. In that document, Dr. Cole described some of the highlights in the evolution of the Pharmacy library. In one particular significant gesture, the Alumni of the Maryland College of Pharmacy commemorated the School's 50th anniversary in 1890 with the generous gift of new bookcases and volumes to fill them. Donations of books and periodicals from graduates and friends of the School occurred from time to time. In 1941, Mrs. Blanche A. Kach, the widow of 1882 graduate August Kach presented to the school her husband's library. This collection of over 700 volumes includes many colorfully-illustrated herbal and botanical volumes, as well as other significant texts, and it represents a large portion of our Pharmacy Historical holdings. Mrs. Kach further increased her support with the establishment in 1948 of the Kach Memorial Library Fund by provision of her will.

Anton Störck (1731-1803), originally of Swabia in southwestern Germany, was part of the Old Vienna School under the influence of Gerhard van Swieten. Under Empress Maria Theresa, van Swieten coordinated Austria's great strides in advancing medicine, and he emphasized a new direction involving the testing of native plants to determine their medicinal properties. Störck succeeded van Swieten in eminence, and he remained convinced that plants known to be poisonous still could be useful in controlled doses. To that end, Störck turned his attention to such fearsome plants as conium (hemlock), hyoscyamus (henbane), and stramonium (jimsonweed). Here he pursues the study of "Flammula Jovis" (clematis, virgin's bower). He gained favorable notice throughout Europe, and both the London and Edinburgh pharmacopoeias accepted many of his findings, helping to nurture continuing interest in the usage of these substances into the next century. Störck's research also set great precedents about the nature of clinical studies and the relationship between dosage and toxicity.

William Salmon (1644-1713) practiced near St. Bartholomew's Hospital in London, treating patients who were not admitted to the hospital. Among his prolific output, his other works include MEDICINA PRACTICA, OR, PRACTICAL PHYSICK; his UNIVERSAL HERBAL FOLIO; his SYNOPSIS MEDICINAE; and his English translation of the PHARMACOPOEIA LONDINENSIS, OR, THE NEW LONDON DISPENSATORY, illustrated here. In the latter work, authorities credit Salmon as the person most responsible for introducing into the London pharmacopoeia the drug Digitalis (sometimes also called Foxglove), known for centuries as an effective folk remedy. It first appeared in that reference as of the 1722 edition.

Samuel Stearns (1747-1819) produced this herbal in 1801, the first one originally created and printed in the United States. The thrust of this work is that it featured selections native to America, and included numerous references to usage of domestic specimens and preparations by native American Indians. In addition to declaring its relevance for practicing physicians, Stearns also pleaded the usefulness of this book to the general population, in the early period of our young country when a lack of physicians necessitated self-treatment. Stearns detailed his plans to publish a more extensive AMERICAN DISPENSATORY, and COLUMBIAN PRACTICE OF PHYSIC AND SYSTEM OF SURGERY, but he never succeeded in completing those ambitious projects.

Georg Wolffgang Wedel (1645-1721) of Saxony in Germany, earned his M.D. at the University of Jena in 1669. Following a brief tour in Holland, he returned to Jena, where he assumed the Chair of Anatomy, Surgery, and Botany in 1673. He eventually advanced to the Chair of Practical Medicine and Chemistry in 1719. A highly prolific author, Wedel lived and practiced at a time of transition, beginning to explore physiological chemistry, while at the same time espousing such medieval tenets as astrology and alchemy. His position at Jena, one of the most populous of the German universities, enabled him to influence great numbers of physicians throughout his illustrious tenure. He died in 1721 as the most senior member of Jena's entire faculty after decades of service in teaching.

Nicholas Culpeper [usual spelling] (1616-1654) was disinherited by his family for becoming a physician rather than following his father into the clergy. Culpeper suffered further degradation when the Royal College of Physicians denounced his earlier work on herbal remedies. Part astrologer and part quacksalver, Culpeper garnered strong negative criticism from portions of the established medical community. Nevertheless, his book became one of the most popular works on herbal medicine and endured for several centuries, with modern editions appearing as recently as 2002. THE ENGLISH PHYSICIAN is credited as the first book on medicine to be published in the American colonies.

The Pharmacy Collection also contains examples of books devoted to related chemical topics, such as this volume by Richard S. Cristiani on the subject of perfumery. Cristiani also wrote a book entitled TECHNICAL TREATISE ON SOAP AND OILS. The business of wholesale trade in drugs sometimes also described itself as the trade in oils, paints, and drugs. Accordingly, the literature of the pharmaceutical profession concerned itself with these other diverse, but allied topics.

Little personal information about Signora Isabella Cortese is available, however the alchemical nature of her works has drawn some popular critical scrutiny, earning her an occasional description as "snake oil peddler." This is a rare first edition of her very popular book, which continued through many editions. A reprint Italian edition appeared in 1995. This book of recipes or "secrets" covers a range of topics from hygiene to perfumery, including sections on colors and dyeing. There is a definite loftiness of tone at work here, with an appeal to women readers who wished to elevate themselves to a grand, ladylike status. This reflects the patrician traditions of Italian apothecaries, especially in Venice, where alignment with the Italian nobility gave to the pharmaceutical trade a comely social and political complexion.

As one of the premier medical schools in Europe, and the one that many Americans attended, Edinburgh remained poised as a supreme authority for the publication of these vital sources. In the earliest appearances, there was some inconsistency in the use of the term "dispensatory" versus "pharmacopoeia." Originally in Latin, the Edinburgh Pharmacopoeia appeared as early as 1699, the start of an enduring evolution of that standard work. Dr. William Lewis (1714-1781) first presented his English translation in 1748, and his work went through several editions over the course of many years. While subsequent editors assumed the mantle of issuing it following Lewisâ€™ death, his general plan of the book remained intact. These are a few samples from the continuing family of related editions.

Richard Brookes (fl. 1721-1763) synthesized the best of two eminent authorities in this translation of the combined pharmacopoeias from Edinburgh and London. This book lasted through three editions between 1753 and 1773. Brookes wrote on a variety of diverse topics, from the practice of medicine to natural history and geography, actively publishing over the course of about 40 years. Editions of his book THE GENERAL PRACTICE OF PHYSIC and his GENERAL GAZETEER also are among our holdings, as part of our Cordell Collection.

Our collection also contains holdings of pharmacopoeias from various countries around the globe. Here are a few selections.

Heinrich Moritz Willkomm (1821-1895), identified here with the University of Prague, also taught at the University of Leipzig. He was the prolific author and illustrator of dozens of works on various subjects in botany. He travelled extensively in Spain and Portugal during the 1840's, and earned recognition as an authority on the botany of that particular region of Europe. His beautifully drawn handcolored plates provide stunning highlights throughout his books. His botanical atlas pictured here advanced through five successful editions between 1885 and 1909.

ATLAS DER HEILPFLANZEN DES PRAELATEN KNEIPP [1903?] edited by Joseph, Archduke of Austria, with illustrations by Margarethe, Princess of Thurn und Taxis. This volume is a beautiful collection of detailed plant illustrations, and perhaps is the most visually stunning book in all of our collections. It contains minimal text that is limited to a preface, and brief captions that accompany each illustration. Sebastian Kneipp, a renowned Bavarian pastor, managed to cure himself of tuberculosis in his early adult years by experimenting with various natural healing techniques. Hydrotherapy was a central component of the Kneipp Cure system of natural healing that he described in his MEINE WASSERKUR of 1886, the work that established his credibility and popularity. Our volume is based on the original atlas published in 1891 as an accompaniment to MEINE WASSERKUR. The atlas enjoyed a subsequent rebirth when it re-appeared in a facsimile edition published in Wiesbaden in 1980.