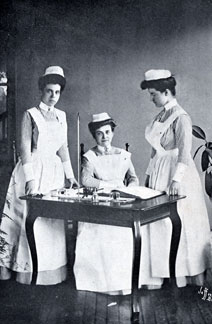 At 56 volumes, the Nursing Historical Collection is the smallest in the room, but it boasts early editions of the writings of Florence Nightingale. Among these are her chief works, the Notes On Nursing and Notes On Hospitals. We also hold examples of well-illustrated biographical works, and copies of her writings on public health and sanitary conditions, inspired by her tours of duty with the British Army in the Crimean War. Among the most popular attractions are her three hand-written notes requesting emergency supplies. As a fitting corollary to Florence Nightingale, the collection also contains biographical items devoted to the life of her primary American counterpart, Clara Barton, including her history of the Red Cross. Other works devoted to military nursing, notably during the American Civil War, are by authors such as Mary A. Livermore and Mary A. Gardner Holland. Also included is Harvey Cushing's fine biography of Louisa Parsons, foundress of our own nursing school, who had trained at Miss Nightingale's school in England.