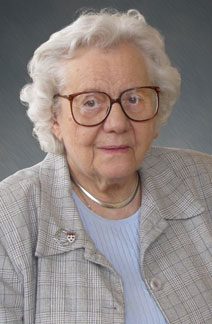 Dr. Charlotte Ferencz was born on October 28, 1921 in Budapest, Hungary. Her father, an engineer, had an acquaintance living in Toronto, who arranged for him to bring his family to North America in conjunction with an employment opportunity in Montreal. After spending the formative years of her upbringing in her native Hungary, the seventeen-year-old Charlotte and her sister very excitedly accompanied their parents embarking on a new life in Canada. They arrived in Montreal on May 8, 1939, just a few months before the devastating horror of World War II exploded across Europe.

Dr. Ferencz earned a Bachelor of Science with distinction from McGill University in 1944. She followed that up in 1945 with her Doctor of Medicine and Master of Surgery, also from McGill. In 1951, she received a Diploma in Pediatrics, once again from McGill. Following her medical school education, she was a rotating intern at the Montreal General Hospital, the Saskatoon City Hospital in Saskatchewan, and the Kingston, Ontario General Hospital. After completing these assignments, she interned at the Children's Memorial Hospital in Montreal. That position led to a Research Fellowship in the Cardiology Department at Children's Memorial from 1948-49, her professional initiation into the field of Pediatric Cardiology.

She first came to Baltimore in 1949 as a Fellow in Pediatrics at Johns Hopkins, working under the direction of Dr. Helen Taussig. She later returned to Children's Memorial in Montreal in 1952, but then headed back to Johns Hopkins once again in 1954. Her association with Hopkins included earning a later Master of Public Health degree there in 1970.

With funding from the National Heart, Lung & Blood Institute, Dr. Ferencz embarked upon the most important project of her professional career in 1981. She was the Principal Investigator for the comprehensive Baltimore-Washington Infant Study, 1981-1989, a population-based etiologic study of congenital heart disease. Drawing upon the resources of 53 participating hospitals and more than 800 physicians, the study included 4,390 cases and 3,572 controls over its period of eight years. The published findings of the project comprise volumes 4 and 5 of the series Perspectives In Pediatric Cardiology.

Dr. Ferencz nurtured a personal interest in the Health Sciences & Human Services Library over the years, and in 2005 she collaborated in the sponsorship and development of a new web site for the Library, entitled "Congenital Heart Disease, a Public Health Perspective." Building upon the discoveries learned throughout the Baltimore-Washington Infant Study, and with an even wider focus, the web site serves as a comprehensive portal into a wealth of information for investigators of congenital heart disease.

In 2008, Dr. Ferencz further celebrated her relationship with the Library by donating her book collection, allowing us to establish this Ferencz Historical Collection. In honor of her many forms of support and assistance, she became the Library's Theodore E. Woodward Award recipient in June, 2008. Additionally, she graciously agreed to participate as the Library's first oral history subject in 2010.

Dr. Charlotte Ferencz has been an avid supporter, collaborator, and friend of the Health Sciences & Human Services Library for many years. In 2008, she donated her collection of books, research articles, and other associated materials for us to establish the Ferencz Historical Collection. To recognize her many contributions on our behalf, the Library presented her with its highest honor, the Theodore E. Woodward Award, on June 20, 2008.

With dual appointments in the Departments of Pediatrics and Epidemiology and Preventive Medicine, Dr. Ferencz is an authority on the subject of congenital heart disease.

Here are just a few sample highlights of items in the collection.

Kirklin, John W. and Robert B. Karp. THE TETRALOGY OF FALLOT FROM A SURGICAL VIEWPOINT. Philadelphia : Saunders, 1970.

Physicians have studied the tetralogy of Fallot for centuries, dating back to its first description by the Danish anatomist Neils Stensen in 1671. The condition arises from a particular congenital ventricular defect, accompanied by certain specific pulmonary complications. This book traces the improvements in surgical interventions as they have evolved from the techniques begun in the early 1950's. Kirklin draws upon his surgical experience at the Mayo Clinic and the University of Alabama to share the results of his efforts in confronting what he calls "the jigsaw puzzle of the surgical treatment of the tetralogy of Fallot" (p. x)

While attempting to compress a wealth of information about pediatric cardiology into a single volume, the editors chose to represent an international approach to the topic. The papers in this fine collection originated from authors representing twelve countries, with their contributions arranged in four sections - Scientific Background, Diagnostic Methods, Structural Heart Disease, and Miscellaneous Acquired Disease.

When Maude Abbott won a scholarship to study Arts at McGill University, it was a very difficult time for women desirous of pursuing formal education. Nevertheless, her determination and aptitude gained her a place, and she eventually graduated as class valedictorian in 1890. Upon deciding subsequently to enter into the study of medicine, however, she encountered the stiffest of oppostion from McGill, the institution she otherwise had grown to love dearly, but which would not admit her to its staunch medical establishment. She entered the Medical Department of Bishop's College in Montreal instead, a rival school begun in 1871 in the hopes of garnering some of McGill's monopoly in the market. She earned her M.D. from Bishop's in 1894, winning the Senior Anatomy Prize, as well as the Chancellor's Prize for the best final examination. After additional study abroad, Maude's path led her back to McGill, where she assumed responsibility for the university's museum of pathological specimens. It was in this capacity that in 1900, her examination of one particular specimen illustrating a heart anomaly ignited the fire that became her lifelong professional interest in congenital heart disease. Under William Osler's direction, her descriptions formed the basis of the section on congenital cardiac disease in his forthcoming classic "System of Modern Medicine." Her "Atlas of Congenital Cardiac Disease" appeared in 1936 and remained a definitive source for many years, contributing greatly to solidify her international renown in the field.

"Her indestructible memorial is her work on congenital heart disease ; her countless beneficiaries, the survivors from heart surgery." (p. 120)

The son of impoverished Lithuanians, Goldbloom was born in Montreal after his family emigrated for the better prospects awaiting them in North America. During Alton's early years, his father decided that the boy would become a physician. His father identified McGill University as the undisputed ideal source of Alton's medical education, partly because the revered Sir William Osler had gone to McGill, and no less than such a high figure would suit as the perfect model for his son. After abandoning a personal predisposition toward the theater, Alton eventually realized his father's desires, and culminated his journey by becoming head of Pediatrics at McGill. In a career that spanned many locations in Canada, the United States, and Europe, Goldbloom's devotion to the young patients at McGill's Children's Hospital forever remained at the core of his professional focus, and framed his reputation as one of Canada's - and the world's - most eminent pediatricians.

Dr. Charlotte Ferencz was the principal investigator for the Baltimore-Washington Infant Study, 1981-1989. An extremely important study from the standpoints of both pediatrics and epidemiology, the project represents the hallmark of Dr. Ferencz's career. In 2005, she collaborated with the Library in developing a web site entitled "Congenital Heart Disease : A Public Health Perspective" (http://www.hshsl.umaryland.edu/chd ). The site presents the extent of the study's findings, as well as a comprehensive overview of the topic in general, and serves as an ideal portal for other interested investigators. The study's published version comprised Volumes 4 and 5 of the series "Perspectives In Pediatric Cardiology."

Originally published in 1958, this exhaustive text has enjoyed a publication history through this third edition, widely recognized as a core treatise on the subject. New to this edition are sections devoted to such developments as noninvasive methods of investigation, echocardiography, exercise physiology, and nuclide techniques. The 62 chapters of contributions from 28 outstanding clinicians are arranged in the four groupings of Introduction, Cardiovascular Problems and Their Management, Specific Malformations, and General Cardiac Disease.

Charlotte Ferencz, M.D. C.M. (McGill), M.P.H. (Johns Hopkins) Professor Emeritus, Departments of Epidemiology and Preventive Medicine and of Pediatrics University of Maryland School of Medicine has had a long and successful career. She shares with us her experiences and perspectives as a pediatrician with a specialty in pediatric cardiology. She tells her story in her own words.

"Why did you decide to become a physician?"

"Describe some of the specific courses or professors who were particularly important to you during your early studies."

"Why did you choose pediatric cardiology as your specialty?"

"You worked at various institutions throughout your career. Would you highlight some of your experiences at these institutions?"

"How did you become involved with public health?"