Skip to Content
The HSHSL is a part of the University of Maryland, Baltimore | My UMB The Elm UM Shuttle Blackboard

The Crawford Collection was originally a private book collection owned and curated by Dr. John Crawford, a local Baltimore physician and researcher who served briefly on the faculty of the University of Maryland School of Medicine. After his death in 1813, the UM Faculty of Physic, recognizing the educational value of his collection, purchased the books from Eliza Godefroy, Crawford's daughter, for $500. It is unclear exactly how large the collection was when purchased, but the estimated range is 300 to 450 volumes. Dr. Crawford's collection, which today holds 569 volumes, formed the foundation of the school's Library.

At the time his death, Dr. Crawford's collection was believed to be the largest medical library in Baltimore. The volumes date from the fifteenth to the nineteenth centuries and focus on natural history. It includes texts from Hippocrates, Galen, Thomas Percival, Herman Boerhaave, William Cullen, Albrecht von Haller, and Carl von Linne.

The Crawford Collection is open for research but closed to donations or transfers.

To search the collection use the Library Catalog.

Volumes from Crawford’s library as well as a more detailed description of the collection and its holdings are available online through the library digital archive. 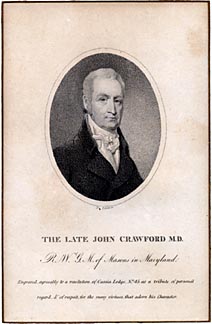 Dr. John Crawford was born in Ireland on May 3, 1746. He was educated at Trinity College of Dublin before starting his medical career as a surgeon sailing with the East India Company. In 1779, Dr. Crawford was appointed surgeon to the naval hospital on Barbados, where he served until his return to England in 1782. In 1790, he accepted a position as Surgeon-Major with the Dutch government at Demerara. He once again returned to Europe in 1794 and completed his M.D. degree from the University of Leyden.

Dr. Crawford came to the United States in 1796, settling in Baltimore, Md. While in Baltimore, Dr. Crawford introduced the practice of vaccinating for smallpox and helped to establish the Baltimore Dispensary, which opened in 1801. That same year, Dr. Crawford, a long-standing Mason, was elected Grand Master of the Masonic Order in Maryland, a position he held until his death.

In 1807, Crawford published a series of works on the "Theory and Application to the Treatment of Disease." In these publications, he outlined his theory that diseases were caused by animalculae (insects or worms). This theory was not well received by the medical community and was ultimately rejected by his colleagues. Undeterred, Dr. Crawford continued to study the theory until his death.

In 1811, he commissioned the treatise A Lecture Introductory to a Course of Lectures on the Cause, Seat and Cure of Diseases. Proposed to be delivered in the City of Baltimore, which became the foundation for a series of lectures given at his home in the fall of 1811. In 1812, Crawford became lecturer on Natural History at the University of Maryland, Baltimore, and served in that capacity until his death on May 9, 1813. His large medical library, purchased by the medical faculty after his death, became the founding library of the University of Maryland.

A more extensive biography on Dr. John Crawford is available in the Digital Archive.

An Eulogium on the Character of Brother John Crawford, M.D., Late R.W.G.M. of Masons in Maryland : Delivered in the First Presbyterian Church, on the 24th June, 1813, in Obedience to a Resolution of the R.W.G. Lodge of Maryland.